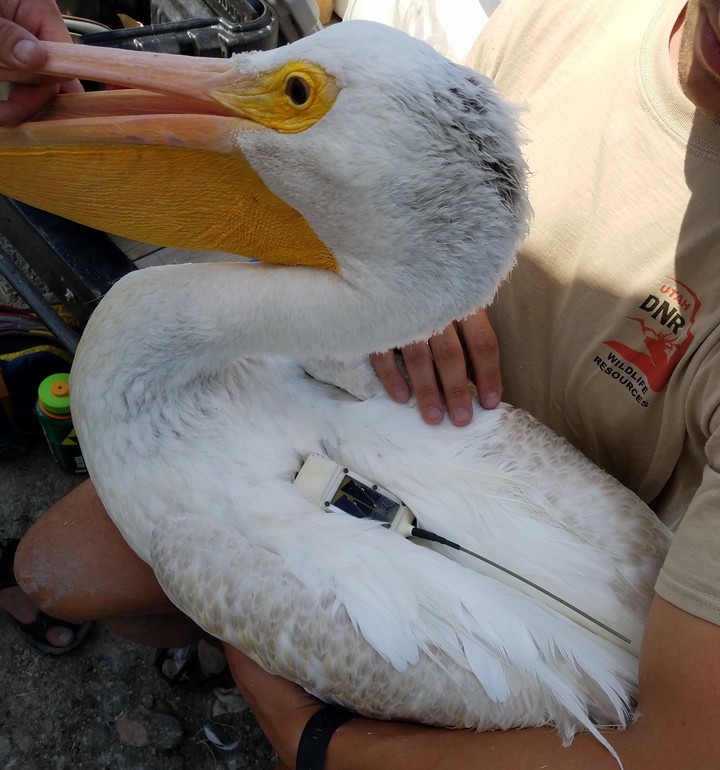 The Great Salt Lake is home to the largest to third largest American white pelican colony west of the Rocky Mountains. This colony breeds on Gunnison Island, a small island in the hypersaline northern arm of the lake. This part of the lake is devoid of fresh water and fish, and breeding white pelicans must travel approximately 50km to the nearest foraging area to gather food for their chicks.

The Gunnison pelicans have a long history of study, with breeding colony counts beginning as early as 1963, intensive study of nesting behavior by USU graduate and prominent ornithologist Fritz Knopf in the 1970s, and fledgling banding efforts by the Utah Department of Wildlife Resources (UDWR) beginning in 2009. The UDWR also began deploying GPS transmitters on adult white pelicans in 2015, and are in the process of expanding pelican movement data collection with construction of a new Motus network around the Great Salt Lake.

We are currently collaborating with UDWR on several projects to better understand the demography, movement, and dynamics of this regionally important colony of white pelicans. This work is being led by PhD student Aimee Van Tatenhove, who is supported by an endowed fellowship gifted to USU by Fritz Knopf.

Habitat selection and niche switching between summer and winter ranges

Using long-term banding data from the USGS Bird Banding Laboratory, this research will estimate white pelican survival over the past 60 years and explore survival pre- and post-organochloride pesticide bans. We will also assess migratory connectivity between breeding and wintering regions, to inform management practices at a continental scale.

Airspace use through radar detections and GPS telemetry

Using radar and GPS telemetry data, this project is exploring the ability of detect and identify pelicans using Nexrad radar images from around the Great Salt Lake. We are currently testing the viability of radar to quantify white pelican airspace use and phenology without GPS transmitter deployment. 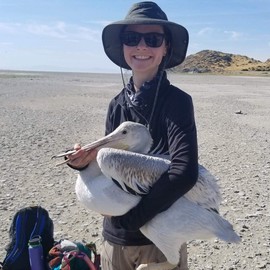